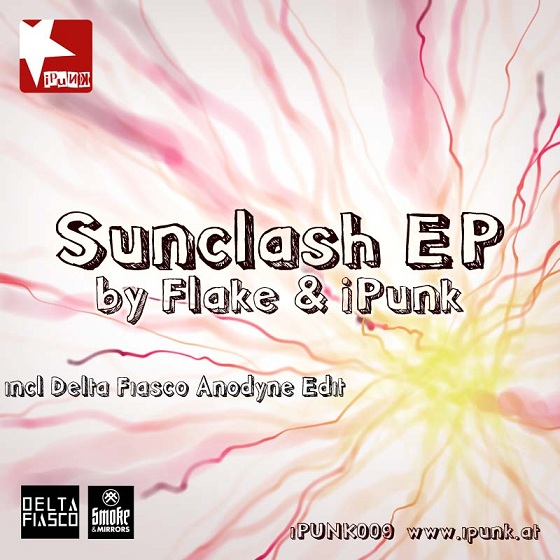 This time iPunk teamed up with Flo Grünberger, who’s been djing under the “Flake” moniker for the past couple years. iPunkRecords presents the mind blowing electro summer smasher SUNCLASH EP including the tracks “sunclash”, “sunclash (iPunk Remix)”, “blue shades” AND including the Delta Fiasco Anodyne Edit. The Delta Fiasco – Originally a duo Nick Bentley (synths/programming/guitars) and Nathan Walczak (guitars/vocals), worked tirelessly on the Liverpool scene, developing a tightly wound aesthetic along the way. Utilising the experimental approach of laptop-as-instrument, a wall-of-sound symphony of cinematic grandiose emerged from the electronic wizardry of Nick Bentley, which, when melded with Nathan’s soaring vocals and provocative lyrics, identifies them as architects of a euphorically dark marriage of electronica and guitars. With the addition of drummer Simon Hilton, the sonic ambitions present on single “Paperhouse” could be realised.

Yeah these four peak time bombs are the first fruits of their labour. Remixes to follow!

Available on August 30th at BEATPORT & all other download stores (iTunes, Musikload, Napstar,..)

And for all the people who love to go clubbing check this new event from iPunk! Teaser!