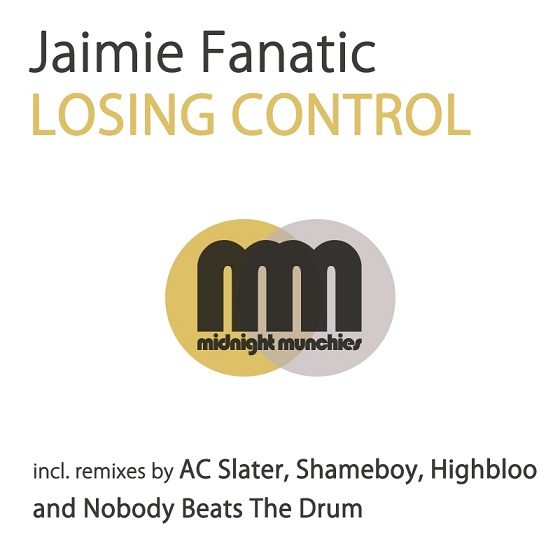 Fatboy Slim said: this gets very very big doesn’t it? perfect for me! Yeah and he means Losing Control from Jamie’s first album “The Unexpected” which drops January on Midnight Munchies. The ep comes with remixes from AC Slater, Highbloo, Nobody Beats The Drum and Shameboy. And now the good thing cause you can get the Highbloo remix for free! Just pay with a tweet or a facebookpost! Nice because the remix is big! Enjoy!

Bart B More: Original sounds so big!
Mixhell: Highbloo droping bombs on this rmx!
Beataucue: the original is so intense, also the ac slater rmx is nice
Andy George (BBC Radio 1): Holy-lord, the Shameboy mix is completely off the hook… This will immediately go into all DJ Sets!
Malente: shameboy deliver the best remix for me
Feadz: Heavy!
NT89: banger! jamie fanatic never disappoints
The Aston Shuffle: Wow the Shameboy mix is MASSIVE!! Going to be smashing this all over the New Year period!
Ampersand: Very hard to decide but: Nobody beats the drum RMX. Very dope release! Thanx!
Josh David (Breakdown): Love the shameboy remix, will be playing. All the mixes here are proper. Great package!!
Mr.Magnetik: i really love the original … But the shameboy remix is a pure bomb … like also the Nobody beats the drum remix as well… great release again on midnight munchiesssss
DJ Manaia: Really cool! Love the AC Slater remix…
Chewy Chocolate Cookies: thanks for this, it’s like 5 mins of build up waiting for the drop that never arrives… it’so crazy that I like it
AudioFun: Huge! Shameboy remix for me. Support!
Acid Jacks: massive
Kim Mathijs (Studio Brussel, BE): Best remix by Highbloo!

Written By
Lorenz
More from Lorenz
Check the new mixtape made by Hey Today! I saw
Read More