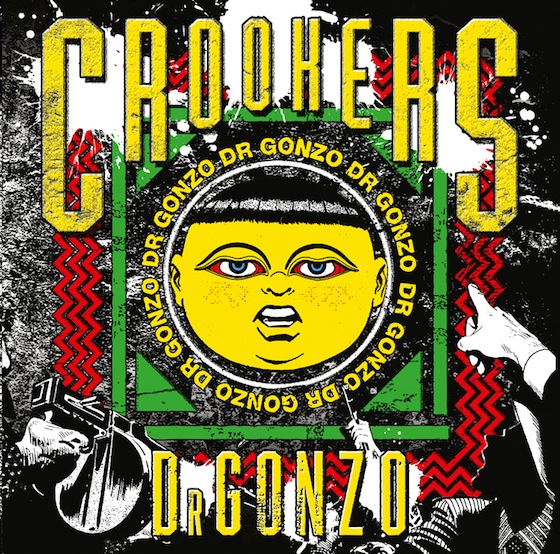 Crookers dropped the first LP with their alterego Dr. Gonzo. The mind of the project is about to bring the club sounds back and yep they did it! With guns like “Springer”, “Dushhi”, “Get the f*^k out my house” just to count a few they create some of the most played tracks this year! Sometimes I wish Crookers just go back to their roots and make tracks like “Knobbers”, “We Are Prostitutes” or the “Let Me Back Up” remix but both just want to generate new sounds and that’s the right way!

But why they have pre-release six tracks in two EP’s?! If you are a fan who knew every track of them and buy the album, you just can hear 4 or 5 new songs and that’s (in my opinion) not enough to excuses the purchase of an album. Check the following press text and previews! Enjoy!

Let’s talk about the new Crookers album, “Dr. Gonzo”. Phra and Bot (Crookers) describe it with the Italian word “accrocchio,” that in English can be translated as a “kludge”. A kludge is a quick-and-dirty solution, a clumsy, yet effective, way to solve a problem, using parts that are cobbled together. This new album is a combination of completely unrelated and random ideas that came together to produce a different kind of dance music. Just as one might expect, the barrier to a new sound has been broken on Planet Crookers.

Dr.Gonzo has it all. The usual suspects are there: house, hip hop and techno, but they are infused with dance hall, Middle Eastern music, steel drums, classic hardcore squeal, whiny violins filtered through synths, and a clear reference to early 90’s euro dance creates something unexpected.


Show Tracklist
“Hummus” a track that wonderfully encapsulates the Crookers, is an unusual tribute to the best beach bangers in the history of music. Imagine “Show me Love” if Robin S were a schizo.

Then, another psychotic track, “Bust ‘Em Up” (feat. Savage Skulls), that together with “Springer” (feat, Neoteric & Wax Motif), exemplifies what Robin Murray recently wrote in Clash, “the latest release from the Crookers has a cartoon-like energy which is difficult not to be hooked by.” Try to resist—you’ll find yourself a sweaty but happy loser.

The core of the Crookers club music philosophy is again the base of this album: a good dance track should be as fun to listen to as it was to produce (there’s no better example than “That Laughin Track” feat. Style of Eye & Carli). This is club music that takes risks, and the result pays off in a big way. Infact, the Crookers’ blasphemous structures have won the respect of some of the most influential personalities in modern electronic music: Annie Mac, Sinden, Annie (the legendary Nightingale), Greg James, Huw Stephens, Rob Da Bank, Jaymo & Andy George, Andi Durrant and Eddy Temple-Morris, among others.

Dr. Gonzo features some distinguished collaborations: Carli and the Savage Skulls, two of the best producers of the Italian scene a.k.a. His Majesty Andre and Lazy Ants, the French Bobmo and the Scottish Hudson Mohawke, along with many others. In particular, the collaboration with Hudson came from his surprise with people crowd-surfing at his sets when he would play “Dr. Gonzo Anthem” a well-tested “Crookers effect” that has been proven true at their concerts around the world.

William Faulkner, one of the greatest writers of all time, said, “Read, read, read. Read everything—trash, classics, good and bad, and see how they do it. […] Then write. If it is good, you’ll find out. If it’s not, throw it out the window.” If you substitute “read” with “listen” that’s exactly what Crookers have done with Gonzo and the result is not just “good”, but “VERY good”. Enjoy the album. Listen to it, play it to your friends, and if you don’t like it, throw it out the window, there will be plenty of people ready to catch it just like a wedding bouquet.

Grab you copy on iTunes or Beatport! If you need a special package go to crookers.net and get an exclusive tee!