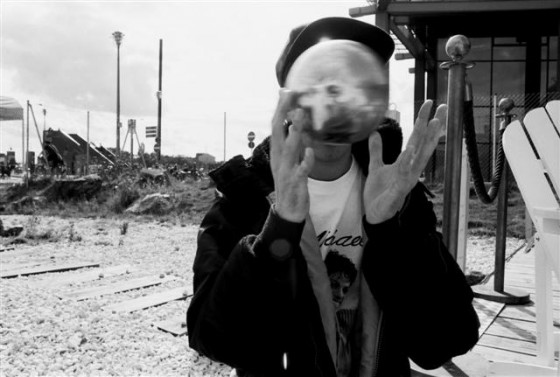 The video is just for my german people but the rest of this post is for the rest 😉 Enjoy!

The Creators Project: You tour pretty regularly—how do you like it?
Boy’s Noize: It’s fun. It’s great to really rock all these different towns and all these places. It was what I always wanted. The travelling itself is kind of stressful, but I’m trying to get into that in a meditative way.

How did this all come about?
I started DJing at 13 or 14. I started to buy all these records that I knew from my older brother—old school rap and stuff like that.

How has your approach to DJing changed now that you’re the primary draw?
It was different because I was playing classical house. I was a warm-up DJ for a pretty long time, so I had to build up the mood, There was a set of unspoken DJ rules. You had to prepare the night for the main DJ. The DJ booth was not right at the dancefloor but a little more secluded so you weren’t really that important. And today everyone is looking at the DJ.

Do you enjoy the way it has changed or are you more of a DJ purist?
I like playing on the stage, right in front of the dance floor. The DJ has become an entertainer. I don’t have a problem with that. I’m having fun.

It’s far more interactive.
The new generation of clubbers didn’t really experience that whole early DJ thing. They dived right into this concert-like event. We might have to teach them about the underlying culture and about the history of the whole thing. That’s what I’m trying to do.

How has digital technology influenced your work in the last years on a practical level?
Three years ago I stopped using vinyl and started to use CDs pretty much exclusively. DJing has reached a new level of sorts. You can actually edit songs while playing them. And that makes being a DJ more interesting, because it is really not that hard. It’s not like playing the piano. So to me it was pretty exciting when all these new mixers came about.

How have you been influenced by DJ culture and what do you think is missing from it currently?
I saw 2 Many DJs for the first time in the late 90s and I thought that was totally amazing how they changed the vinyls so fast and how they mixed those different styles of music. I really liked that, because it was completely new and it took it to another level. And with this new equipment it is even easier to mix a 60s Stooges record with a Jeff Mills record. Kids today start DJing with a laptop and what they play is way faster and they mix way more and that’s sometimes even annoying for me. One of the artists who is on my label started with a laptop but he decided to start using CDs instead because he didn’t want the really fast and really sudden mixes anymore. The records are produced, too, you know? Somebody actually thinks about the length of a record and about all the different parts on it. And sometimes I hear a young DJ with his laptop and I’m thinking, “Wait, don’t stop it there, there is this really good part coming and don’t mix it out there, there and not later. There is no real buildup, it’s more one shot after the other. One after the other it’s not a real wave movement. You learn that as a warm-up DJ. You develop a feeling for those moments.

So how is your creative process different?
When i went to the record store I always tried to avoid getting the same records as my friends. That seems to be a bit more difficult today, with all these blogs around. Everyone is downloading and using the same stuff.

What about collaborations?
I like to work with other people. I just finished Gonzales’ new album called Ivory Tower, and we sent stuff back and forth. I also did remixes with Erol Alkan and with him it was important that we were actually in the same room.

Is there some sort of major inspiration for you? Literature, music?
I’m interested in art as a whole. I’m excited how artiste create new ideas and I’m pretty sure that there is a lot of really good new art, right now. Although my favorite artist has been Hieronymus Bosch because I think that his vision is really awesome, especially for the time he lived in.

What is your vision of the future of DJing?
I think it is very probable that the DJ will return to the background again and they will become less important again. Because of all this visual, star-cult overdose. There will be a movement of clubs and DJs and it will be more about the music again. But that’s all in the future. It’s going pretty good right now.

Written By
Lorenz
More from Lorenz
Here we go guys! The Line Up is complete
Read More