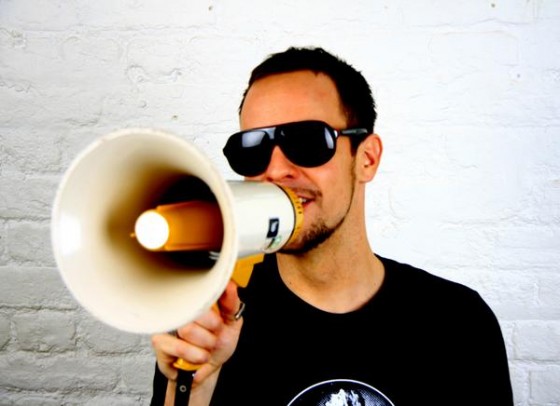 Or sax… And yes he know the difference between a trumpet and a sax. Per QX is from Stockholm but moved to east London about 9 years ago. He releases tracks on
Roger Sanchez’s Stealth records and Larry Tee’s “Dj’s are not rockstars”. He’s been busy remixing Laidback Luke, Lady Gaga, Deadmaus Feat Mellefresh, Tomcraft, Princess Superstar and The Young Punx this year!

Any club kid who’s happy to spend their weekend standing in line at an old East London strip bar between the local bearded tranny and the Hoxton fasionista crew will be familiar with DJ & Producer Per QX.

Time out’s very own club reviewer Kate Hutchinson praised Per’s latest Exclusive dj mix and wrote “If Laidback Luke ditched his vocal house fluff hanker kings and spent a night at the Dalston Superstore, he’d do well to drop a set like this.”

As the promoter of one of the most acclaimed underground club nights in recent years GutterSlut, he presents a regular cacophony of electro, techno and mash up that’s captured the imagination of Londoners to the point of frenzy. The club’s ‘GutterBall’ party was reviewed as the best UK Club event in December 2009 by Mixmag.

His reach doesn’t stop there however – he’s played house and electro parties in over 30 countries, as well as appearing as a guest on Ministry Radio’s Saturday Sessions, Peter Rahaufer’s Star 69 radio show, and Larry Tee’s ‘Super Disco Party Machine’ in the US. This year he’ll be playing at Glastonbury for the first time, as well as making several trips over to the White Isle…well, it would be rude not to.

Last year Depeche Mode gave their blessing to Per’s cover of their classic “Everything Counts” which subsequently reached number 2 in the iTunes dance chart.

Download it here or buy it directly on Beatport!

Check his Soundcloud for more stuff like free mixtapes or tracks!

Written By
Lorenz
More from Lorenz
This new entry of the #MixtapeMonday (yay let’s hashtag it) is filled...
Read More