“The fact that Modeselektor became so successful is, I think, hard work. It didn’t all fall from the sky.” – Thorsten Pröfrock (Hardwax). At the 3rd May, you can order a DVD/Bluray which will answer you the following and many other questions: What is a “Seilscheibenpfeiler”? Where did the first Modeselektor tracks come into life? Why is a ride in a tour bus more fun than being on a plane? Where is Monkeytown?

The documentary comes in collaboration with Electronicbeats and will be available through the Monkeytown Records store on DVD and Blu-Ray. 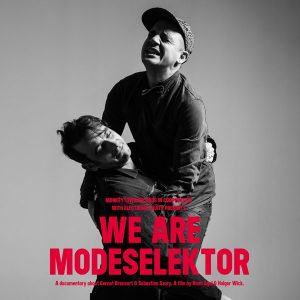 In 72 minutes the film makers Romi Agel and Holger Wick draw a portrait of Modeselektor, that is more than just a biography but a movie about Germany after the wall came down, a travel reportage and a story about a special friendship all in one. “We Are Modeselektor” tells the history up to today of Gernot Bronsert and Sebastian Szary by means of numerous interviews with Modeselektor itself and companions like the VJs from Pfadfinderei, Ellen Allien or Moderat band colleague Sascha Ring.

20 year old video recordings show raves in abandoned industrial factory basements that Szary organized, with the 15 year old Gernot as a party guest. You see how Szary with analog synths works on first improvised Techno live sets and Gernot – with a Naomi Campell poster above 2 record players (bought from money saved over 2 years) – does his first mixes. And you get to know how two very different persons personality wise became friends, who a few years later played DJ sets and finally produced tracks together.

The movie highlights important events in Modeselektor’s biography: Their first record “In Loving Memory” on BPitch Control, the foundation of their own record labels “Monkeytown Records” and “50WEAPONS”, it shows both of them being nervous with stage fright before and pulling off their notorious champagne showers during their shows from Amsterdam to Zagreb and also accompanies them in their private lifes, offside their musical career.

“We Are Modeselektor” is a story of two Techno demoniacs who descended from small villages in order to fill the world with their beats. And it’s a story, that is not finished yet at all.

Written By
Lorenz
More from Lorenz
Helsinki’s bass and electro music don and a Top Billin member of...
Read More