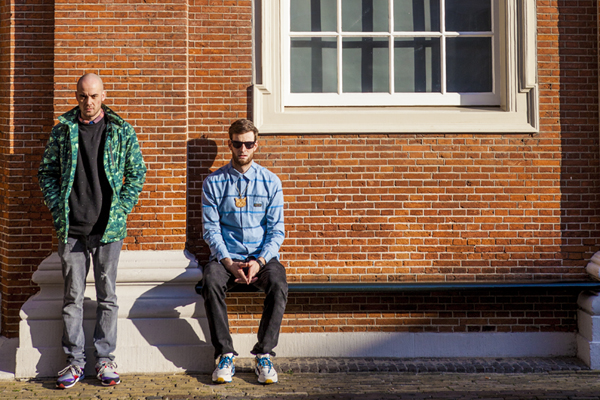 The 22nd exclusive mix is a journey through techno, brought to you by no less than Henzel & Disco Nova. The two guys were also kind enough to spend some words about their roots, current projects, new collaborations, their new style and many many more… And by the way, when we hit the 1000 plays, they’ll give us the tracklist!

Welcome guys and thank you for take the time to answer this questions. Let’s start with a simple one: Please tell us the story about the beginning – do you know each other since childhood?

No, not childhood.. But we are from the same town and started hanging out through mutual friends.
When we started clubbing we noticed that we had quite similar musical tastes, this was the main reason for us to start DJing together.

I’ve read your name often in conjunction with “Vage Gasten” and I’ve no idea about it – so what’s behind this name?

5 years ago everything started with this creative collective, we threw our own parties and hosted big festival stages. Thanks to this nice endeavor with friends we were propelled into the club and festival scene of Holland. We took this opportunity with both hands and now are building on these experiences (pic).

Together with NT89 and TWR72 you are hosting a really successful club night called “RARA AVES” in Amsterdam. Give us some more details and are there any plans to expand it to other clubs/countries (please confirm this!)?

About two years ago we started to become bored of the standard electro, it was during this time that we noticed that TWR72 & NT89 were pushing things forward and creating a great combination of electro and techno.
This really inspired us to also get more into this sound. This is also the reason why we started Rara Aves, it was to create a night where electro and techno were combined. But after a while we noticed that we actually started playing more and more techno and almost no electro. So you can say that during the past 2 years Rara Aves became a techno concept.

Not only is it an Amsterdam club night, you can see it as the combined force of NT89, TWR72 & HDN
We are planning new parties throughout Holland and other European countries. Next to that we are also producing together and you can expect a RARA AVES collab ep pretty soon.
(You can find one of these tracks inside our mix)

Beside “Vage Gasten”, “RARA AVES”, producing music and being a successful DJ duo, which is enough if you ask me, there’s another project Henzel & Disco Nova are working on. It’s called 22tracks.com – please tell us something about it.

Yess, we have been part of 22tracks since the beginning, it started out as a inspiring Amsterdam based project by two friends. Its goal was to let people discover the latest and best music in 22 different genres in an easy way. By now it has expanded to Brussels, Paris and London. In the near future other
capital cities will be added each with it’s own 22 DJs.

Your new remix for Sharam Jey’s “Unique” really differs to your sound back in 2011, like the “Gimme 5 EP”. Did you simply changed your style or is it just because you want to try something new?

It happened naturally, as a DJ team we are always looking for new sounds and challenges.
At one point we felt that the electro scene was not evolving anymore. All songs started to sound alike and it also felt like it wasn’t original. Also nowadays the commercial EDM sound has a lot of electro influences and this is a sound we want to stay far away from.
We feel really at home with this new direction, it feels like we reinvented ourselves.

As we speak about past releases, what about the future? Feel free to announce some big news coming this year!

Also in our future releases techno will be the leading sound. We have been really busy this winter.
We have done several remixes, around 8 original tracks and collaborations with NT89 & TWR72.
So expect a lot of HDN material in the near future…

This mix actually includes 3 of our new tracks, maybe you can spot them. Besides that we are also crossing borders often, within the near future we will be playing in Germany (Bootshaus), Italy and Belgium

– Your favorite track at the moment?

– The latest “wow-moment” you got, as you first heard a track?

Nova: DJ Hyperactive – Wide Open, because I was high on something and this one sound soo good.

– The biggest mistake you’ve ever done?

Nova: Wearing my new sneakers to a club
Henzel: No mistakes, just one big learning process where we use our missteps to grow 😛

– The drink, you really shouldn’t take before you’ll play (any bad experiences)?

Henzel: Not a drink, but space cake, I can’t function after taking that.

– About the cliché we all know about Amsterdam, are they true?

– You’ve to recommend one artist, who would it be?

Henzel: Truncate aka Audio Injection, this guy is producing some solid techo.
Nova: Rebekah, I just fucking love her. I mean a hot chick that plays hard techno.. what else can you wish for..

Written By
Lorenz
More from Lorenz
It was back at the 9th November 2009 I’ve discovered “Audionite” with...
Read More