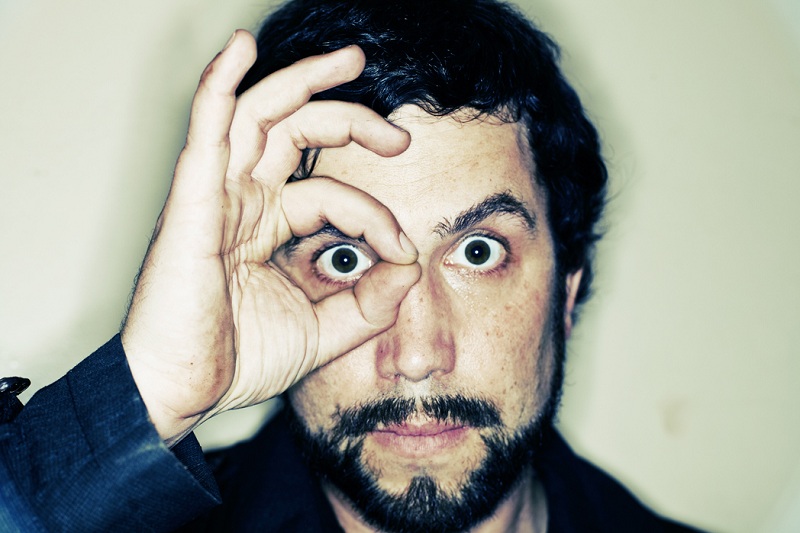 As you might know, since some months I’m a co-writer for earmilk.com. Being a part of this bigger platform brings some advantages like the chance to interview Zombie Nation. I’ve add some parts to read here but you’ll have to read the whole interview at earmilk cause it’s exclusive!

EARMILK: First let me just say that it’s a really big pleasure to interview you. Let’s start with some essential questions about yourself. When and how was your first touch with electronic music?
Zombie Nation: That was in the early 90s, I discovered techno at warehouse parties and the legendary ‘Ultraschall’ club in Munich also played a big role.

EM: Before you got your hands on producing electronic music did you have any musical apprenticeship? Like playing a “real” instrument or something like that?
ZN: I learned guitar from when I was seven years old. It was more like playing sheet music and learning the instrument. It got more creative only when I was experimenting and composing my own music later on.

EM: It was 1999 when your first Zombie Nation EP released on DJ Hell’s label “International Deejay Gigolos”. How did it happen and do you still keep in touch?
ZN: When I started buying records, Gigolo was my favorite label, mainly because they crossed the line of genres which was not usual at that time and every new record could be a total surprise. It was exciting that Hell caught on to one of the demos, and I was happy to release number 19 on the label. I see Hell from time to time, we just played at a party together and had a lot of fun.

EM: “Kernkraft 400” was one of the five tracks on that EP, don’t get me wrong, most of the producers out there would do anything to have a successful track like that but can you yourself still listen to it?
ZN: It has become part of me like for example my leg. I mean most people like their leg somehow. Maybe they don’t love it like crazy and they wish the leg to be longer or different. But most of the time they don’t think about it, and most importantly they don’t want to live without it.

EM: Enough about the past, let’s talk about the future and the perfect issue is your upcoming LP. Please tell us something about it, what can we expect?
ZN: I think it’s my most conclusive album yet. It’s hard to judge at this point because I don’t have the distance to the tracks yet. We already received a lot of great feedback on the first round of DJ promo, and I am excited to see what happens next.

EM: I had the chance to listen to it and I’m really impressed by the fact that all of your tracks have a unique sound. Is this what differs from other artists?
ZN: Well, I can’t say if I have something that makes me different. Maybe it’s the fact that I don’t use Ableton very much, like 90% of producers out there at the moment.

EM: According to the number of your LP’s, it should be an cinch for you to create a new one, how was it with “RGB”?
ZN: I am not especially fast at making new tracks. And my regular frequency is almost 3 years per album. The good part is that I am done with it and I feel free for a while, until the pressure for a new album comes up again. This album came along quite easy, and it never felt like hard work.

EM: Sure I don’t mean to pry, but I would have chosen “Sigma”, “Schoove” and “Pony” as the first release. So is there a hidden agenda when you decide to throw out “Meathead” together with “Attic Sundays” and “Blueberries” as the first tracks?
ZN: Not really, I spoke with Thomas at Turbo Records and we decided together. It’s thanks to him that for example ‘Schoove’ made it on the record at all. It was only a sketch and he pushed me to finish it. There are 14 tracks to choose from, so you have to make a choice – and there is always a next EP.

EM: What can we expect after the album release at the 10th December? This is the perfect time to tell us some secrets.
ZN: To be honest, there was a lot of work lately, and I have not made big plans for the time after. It will be probably unspectacular stuff like working on the liveset, doing some remixes and such. And maybe, just maybe taking a few days off. I am still working on that.

EM: You have also an collaboration with Tiga, called ZZT and the LP-released last year- which to me is already too long ago. So is there anything new in the pipeline?
ZN: That’s not so long ago! Anyway, we met many times for 2-3 days, and over the time we had made quite a few songs. I was kind of surprised that we had enough music for an album together. Right now we don’t have any concrete plans – but we will sure get together again soon.

EM: How was it like to collaborate with him? Was it mostly structured behind the mouse or “let’s jam with that drum machine and see what we’ll get”?
ZN: Mostly we start by listening to some music or cutting a few samples. We make a beat and turn on the system 100m modular system and record a 10 minute jam. Then we cut out the best parts. Sometimes it works easy like that, sometimes we decide to go out for some pizza and try again.

Read the rest of this interview and watch ZN working at the studio on earmilk.com!

Written By
Lorenz
More from Lorenz
Faith in humanity – restored with a really lovely project by Gold...
Read More