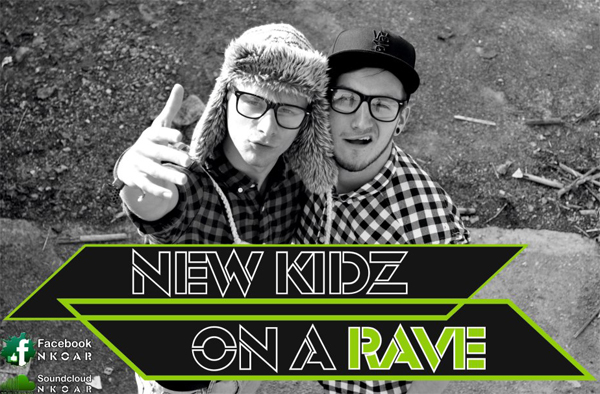 Chosen by my Facebook fans with a short, spontaneous survey. And now, unfortunately some weeks too late, here we are with another exclusive mix, this time made by rising German electro duo called New Kids On A Rave. I don’t want to talk to much about them, cause you will find some facts in the interview below. I guess this wasn’t my last poll on facebook, why? Cause I’m doing this for you all. Enjoy!

LM: Hey guys, first thanks for making the mix and welcome. So please be kind and give the readers a little introduction about “New Kids On A Rave”.

Micha + Norris: No problem, you’re welcome. It’s a big honor for us. Well, NKOAR are we both, that means Micha as Vicedo and Norris as Neorave Disaster. We like to play some harder Electro music with sounds, what makes everybody happy and let the people dance – but no mainstream, no house and no Dubstep music or sth. else. NKOAR is a kind of a fusion of the hard style of Micha and the loose style of Norris – the common style can’t be really described, as it is varied, it’s new. We make the party a real rave and not just talk about it ;-).

LM: What kind of music you prefer to play?

N: The largest part of our music is hard and funny Electro, ultimately to spread fun with it, but we also want to serve as a little extra a small mixtape of real Rave – for the good old days. That’s why the “Rave” is in our name, not just about the party thing.

LM: New Kids On A Rave would never play records by …?

M: Haha…good question, next question! We’re open for all new Electro stuff, we can’t rule out in advance not to play records by anyone, as long as the music fits into our concept. The main thing is that it’s Electro and not Dubstep, Techno etc.

LM: There’s always a discussion about “vinyl-vs-laptop-vs-cdj-DJs”. What do you think about and what is your current equipment?

N: I was a long time a laptop DJ, but I sat down and I learn to play without technical aids, only with CDJs, in the last time.
M: I don’t like the laptop DJs, there are far too many simple resources for the perfect sound (for example see the traces, to synchronize the tracks). I started to play with vinyl, but then I switched almost exclusively to CDJs. Norris has learned extra therefore to play without a laptop. I’m proud of him, he has a talent. So our current equipment are 2 CDJs.

LM: Where can we find you playing your mixes/shows?

N: It’s a young and new project, so we’re looking for some shows, but we hope to get some in the next time. We’re looking forward when we finally rock the club together.

LM: Tell us something about your upcoming plans, gigs and stuff?

M: The big plan is to build an own track for NKOAR, but we like to play often enough in many clubs and not only in Germany. Our merchandising stuff will be out soon (you can take a look to our 1st shirts on our fanpage on Facebook).

LM: If you could book yourself to a club, which one would it be? Maybe the right booker will read this ;).

N: Of course we like to play in the hottest Electro clubs and to the greatest shows like in Germany in the Club Gretchen in Berlin or the Crux in Munich. But we both are fans of small clubs where about 300 guests fit in – the atmosphere is amazing and the people know why they are there and not only to present themselves.

LM: Your top 5 tracks at the moment?

LM: Last but not least, thanks for taking your time and show some love to your fellows by give them a little shout-out.

M + N: No problem, we have to thank you. Boys & girls, be ready for us – we’ll show you how to rock the club and have a great party together in the next time!

More Info’s:
New Kids On A Rave on Facebook | Soundcloud

Written By
Lorenz
More from Lorenz
Fatboy Slim said: this gets very very big doesn’t it? perfect for
Read More