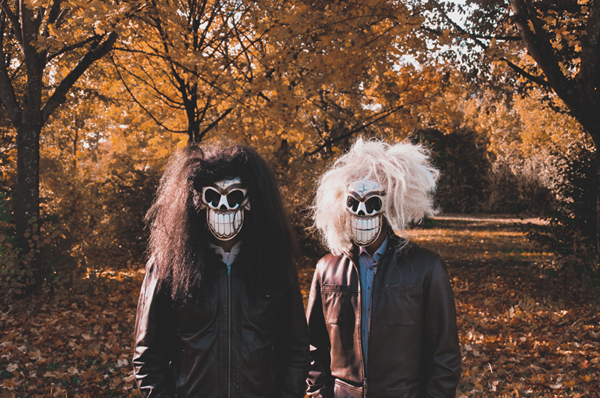 Pleasant, professionell, musically – just some essential facts to be successfull and that’s Hanuman Tribe. Two brothers who perform pounding electro and urban bass LIVE. One eye on musicality and the other one on raw power! Both draw their inspiration from a vast variety of styles. What matters is pure musical energy and driving impulses which directly go into your heart and feet. I’m proud to present you this next mix. To get some more details simply enjoy the interview.

Hi Hanuman Tribe, could you please introduce yourselves.

O: Lilijan and Orchidan, two brothers with a passion for good music. As a live act, producers and as listeners.

You work together and you are brothers, does this mean that you have a strict division of labour or do you work on everything collectively.

L: Orchidan produces the Tracks, I make the sandwiches and make sure the beer is cold.
O: Half of the time we work independently, the other half we work together. We each start off on our own musical ideas but we then work them out and polish them together.
L: It’s like that in everything we do. For example, when we manage events in our hometown Augsburg and the way we run our label ‘Riot Riot Records’ together as well. Whatever we do, we each have our own area of expertise.

From your answer I can tell that your have your fingers in a lot of pies – your work is as versatile as your mixtape!

L: That’s really important for us. Versatility is the engine of creativity! Our heritage is multifaceted and we love diversity so we let it all flow into our tracks and so the mixtape.
O: And we also love to build sets like telling stories. We lare working with points, an arc of suspense, and a scope of action. For example, you can also find the ‘autumn’ an the ‘gold’ in inside that mixtape.

Speaking of influences – Was there a crucial moment when you decided to become full time musicians?

O: We have been playing music since our early childhood. We were both taking classical piano lessons since the age of 6, which we both loved.
L: Yeah, exactly (laughs).
O: Ok. Of course, there were moments when you’d rather be doing anything else than drilling a Bach prelude.
L: I can still remember that I used to hide comic books between my piano sheet music. I used to read them during my finger exercises and hide them whenever our dad came into the room.
O: Our dad is probably one of the reasons why we launched into music. He is an artist – Dewa Waworka – and his paintings are unbelievably realistic and, in addition, he is an absolute perfectionist. We would have never been able to get to his level so we found our own profession.

Your father is a painter, so you come from an artistic family. Did that influence you?

L: Of course! Many things we have seen in our lives were shone upon from very unconventional sides. This applies to our musical influences as well. Although I grew up in the 80’s, I barely know any of the hits of that decade. At the time we only listened to our parents’ music.
O: We had loads of great stuff at home! The Flying Lizards, Roxy Music, The Stranglers, Procol Harum. And a lot of experimental and electronic bands, Laurie Anderson, Cassandra Complex, Walter respectively Wendy Carlos, or the early Yello albums.

So a lot of electronic music. What was the first EDM release you ever bought?

L: That was 45rpm from Paul Van Dyk. 1994. We really liked ‘Spannung’ or ‘I’m Coming.’ I was 15 and, as it happens at that age, it didn’t take long until I started to think it was too straight. At the time I was going to a musical secondary school which meant classical music all day. That meant in order to get the balance I needed music with more power and a more aggressive sound. The outcome was that I soon started to listen to Jungle and Broken Beats.
O: Shy FX & UK Apache, Original Nuttah. Lilijan listened to it 10 times a day.
L: That was totally fresh for me then. Rough, urban, awesome beats. I was addicted. So in my first band we used to play Drum’n Bass, Bigbeat or Downbeat.
O: And that was also the sound we had at the beginning of Hanuman Tribe. Breaks & DNB.

Let’s move on from your roots. What does your future look like? Which direction are you taking with your music? What releases do you have planned?

L: We are increasingly moving in the technoid direction. It’s not a genre hype thing though. We have been doing House and Techno under our Alias ‘Moment Musik’ for a couple of years now. It’s just what feels right at the moment.
O: We always were and are partial to sophisticated harmonies and goose bump causing melodies. Now we are excited about taking away one or two steps of musical knowledge to create a new and reduced sound that gets to the point.
L: It’s a constant development. You never reach a plateau, no matter if it’s ability, influences or the output. Of course, that doesn’t mean we can’t push down hard on the rave gas pedal if it fits the vibe of the night. However, recently there have been plenty of Electro & Maximal releases and most of them sound the same. Everyone is using the same samples, the same presets. Obviously we want to look for new sounds and vibes.
O: In a way, that’s what we do. When we start moving in a genre we are already looking for ways to break free from it by creating our own sound.
L: Which is what you’ll hear in our album, which we are working on at the moment.

You are working on an album? What can you tell us about that?

L: It will be our debut album. We are going in a new direction with it. The sound is darker, cleaner and more technoid but still experimental. Funnily enough it’s going to be a debut album without any original tracks. There will only be new remixes. That’s the concept. We are giving a Hanuman Tribe boogie makeover to tracks from our friends and our home base.
O: This baby will also be the first of a trilogy of albums. The next one will have new original tracks on it and the third will be an album of remixes that other artists will have done of our own tracks.
L: And when the saga is finished, it’ll be turned into a film.
O: We are more than half way there, but we’re perfectionists and we are taking our time. Lots of it is recorded live or done in the studio.
L: By Peter Jackson
O: There will be a couple of preview tracks from the album on the Autumn Gold Mixtape.
L: And Orchidan is going to be Gandalf.

Thanks for the preview, sounds exciting! Finally three quick Q&A classics and then we’re through. Clubs you’d like to play?

With which artists would you like to collaborate with?

L: LCD Soundsystem the day they hopefully reunite again, Flying Lotus, Woodkid, The Chemical Brothers because they are our childhood heroes, and also Gesaffelstein. I’d love to know where he get’s his suits.

L: Obsessive Compulsive Disorder.
O: Leaving things lying around all over the place.

It’s been a pleasure. Thank you for the interview.

Written By
Lorenz
More from Lorenz
Another free tracks by Bad Life label owners autoKratz. This time they...
Read More