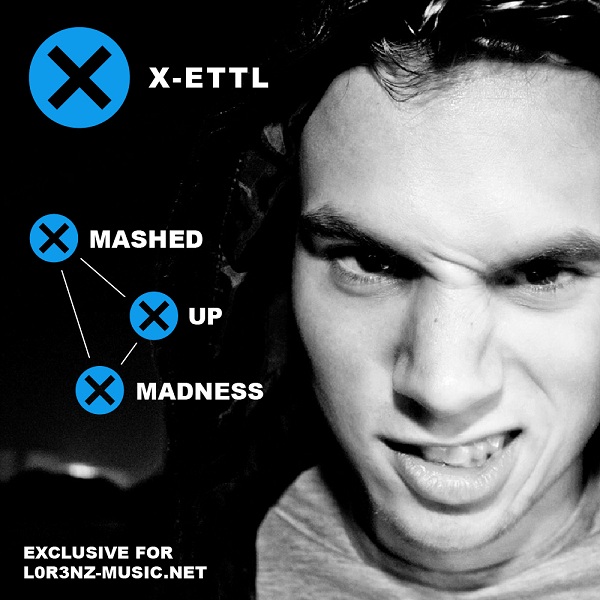 Finally here is the next exclusive mix I got from one of my favourite artists out there – X-Ettl! Okay it’s not a full mix, it’s more something different as the last exclusive mixtapes cause he made a special seven minutes mashup!! It’s pure energy! Amazing! Really love it!

I’ve also sent him some questions which are maybe of interest for you. Well, I hope you’ll enjoy!

LM: First, thank’s for take your time and answering some questions. So what the hell are you doing right now? Cause it became a little quiet around X-ettl!

X-Ettl: I’m taking some time to produce new tracks. I can’t do anything else, because I have no bookings in 2011. I have to wait until 14 januari to play again.
New things are, only the remix I made for F.O.O.L actually, but there are more things here on my mac I didn’t came out with yet.
So, yes, it’s a little quiet around X-ettl, but there’s a lot happening behind the scenes. Don’t worry.

LM: Slowly but surely 2011 comes to an end, so what was your personal highlight this year and why?

X-Ettl: I would remember a highlight, and I don’t remember anything.
You could say I’m happy about 2011, but it wasn’t my “highlight year”.

LM: After your “Sintetic” EP on german label Mähtrasher (which I missed and that’s a shame) what are your plans for the next months or 2012 – what we could expect?

X-Ettl: Well, I’m busy on new stuff, but I already said that. There are no solid plans yet, or I better say: I can’t talk about them yet.
But I’m definitely looking forward to some ‘plans’.

LM: You are one of those guys who can’t handle your musical output with just one alter ego, so you have two, X-ettl and Shaytek. What’s the difference between them and why you have two?

X-Ettl: Yeah! I really can’t handle it, I even have more, but I only do other projects when I don’t feel like making an X-ettl or Shaytek.

I think I don’t have to explain the difference.. I think it’s quite obvious when you listen to it.

LM: Do you have a “ritual” before you’ll play a club/festival or something like that? I mean some DJ’s come, play and go or others just enjoy the energy, talk to some people, drink a lot and then play. And how would be the perfect gig for you?

X-Ettl: Redbull! And the perfect gig for me is.. big or small, it doesn’t matter, but with people enjoying and dancing and shouting on my music.
That’s all I need.. and Redbull.. of course 🙂

LM: Your top 5 tracks at the moment?

X-Ettl: I’m really no top anything man, so I just gonna skip this question.. and the next one too 😉

So if you really want to know which tracks X-Ettl have mashed up, so leave a comment, share it with your friends and maybe he will give it to us! Or find the tracks by your own! Anyway, enjoy!

Written By
Lorenz
More from Lorenz
Number 156 of this Mixtape Monday series is like a new iDevice...
Read More