2010 was a huge year for Schlachthofbronx. Releasing two EPs on Man Recordings and supporting Grammy and Oscar-nominated pop star M.I.A., Schlachthofbronx and Mad Decent are proud to present you with their brand new EP “Nasty Bass.” The first track – “Chambacu” – is a tropical monster, sampling the traditional cumbia song of the same name, and bringing it into 2011 with an insane horn drop that will be a staple of any party or rave scene. By modernizing the Latin sample “Chambacu”, it’s guaranteed to induce anyone anywhere to move their feet. The following two tracks, “Nasty Bass” and “Impler,” both feature the globetrotting South African MC Spoek Mathambo. “Nasty Bass” features Spoek’s clever rhymes riding over a 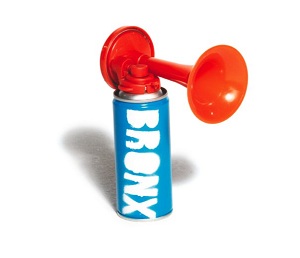 warble snare driven beat, while “Impler” builds like the foreboding rising action to an inevitable fate of the signature Schlachthofbronx siren chorus. Rounding out the EP, Timberlee’s vocals get chopped up over the slowburner, “The Bassdrum,” spiraling against the quick clapping beat. With “Nasty Bass,” Schlachthofbronx aim to continue their trajectory toward global bass champions.

I know it’s not the usual stuff but I love it! Heared it a few weeks ago but I don’t think its worth it! Then Nick D-Lite, airhorn addicted too, used it for his intro – I guess – and on a good stereo it’s massive! Buy it here on Beatport!