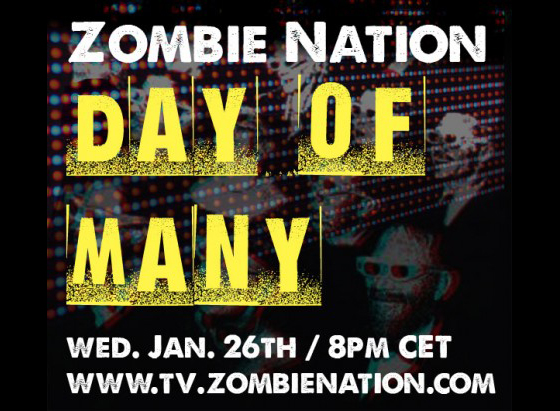 The mind of many part two comes in a few days. The date was postponed to 26th January! Remember in early 2010, Zombie Nation conducted an experiment to create an interactive Song with his fans using Facebook and Twitter. The Mind of Many resulted in a Song that was made from 40 sounds submitted by fans, as well as countless voters. It was a great success and brought joy to everybody involved.

? Zombie Nation and Friends – The Mind of Many

Now it is time to continue and head for new frontiers. The idea is the same, but evolved: The “Day of Many” will be condensed into a 90 minutes online broadcast from the Zombie Studio in Munich. A song will be made live, from scratch, purely from sounds people send in during the show. In the chat space of the broadcast, you will be able to comment and influence decisions and directions as the track is developed.

This has never been done before and there is no test run – expect chaos and sweat to rule the Zombie Studio! During the session you will also be the first to get a sneak peek of Zombie Nation’s new single and the remixes by Boris Dlugosch and Siriusmo.

Don’t know if the following track called “Chick Flick” is the new EP but I heared it on his own Minimix and at last on a Boris Dlugosch Radiomix. I completly fall in love with it! That’s why I cut it out of it and share it with you!

All the necessary infos about Day Of Many:

Written By
Lorenz
More from Lorenz
Hey guys! I’m so sorry for the little holiday-delay but some days...
Read More