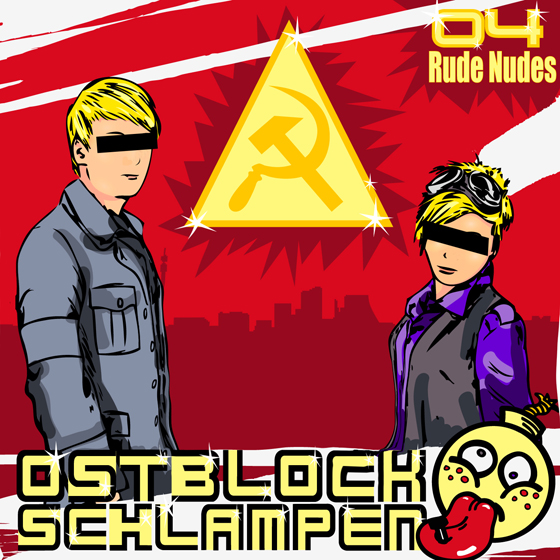 World premiere of the new upcoming Ostblockschlampen EP called “Rude Nudes” (DDR004)! Propaganda!!! Propaganda!!! They come from the eastern bloc – rolling with the moskwitsch and ready to bomb everyone which crossing theirs way! “Rude Nudes” is the first mini-album from the “Ostblockschlampen”! It’s less a clubtune than more a exaggerated but high-minded description of their skills which they earned in siberia – rubel by rubel – since the beginning of the cold war! For the dancefloor made the bitch-brother in mind “Edu K” a cool funky remix! The soviet veterans “Choreo”, “Stereofunk” and “iPunk” make the remix package complete! It only remains for me to add that: “Warning! It can happen everywhere! The nuclear power of the OSTBLOCKSCHLAMPEN! Cause… THEY WILL BOMB WHO THEY WANT”!

In my opinion the three original tracks are really a bomb! I guess the most of you know it from the exclusive mixtape by Markus Lange! So listen…

Shameboy “My favorite is the original of Rude Nudes! Will play it tonight for sure!”
Jay Robinson “Original for me!”!”
Sharkslayer “lovin rude nudes, weird and fun tune that will def be on our playlist!”
Larry Tee “that Edu K one is major rude!”
Act Yo Age “Thanks for this – Edu K mix will make our sets for sure!”
Autodidakt “I’d like to order the Choreo Remix please! And I think I’ll have the red wine and some chocolate for dessert :D”
Maxcherry “I realy like the Edu K Remix. Full support!”

Be prepared for the release date and if you don’t wan’t to miss it bookmark this link ;)! Enjoy and remember where you’ve listen it first!

Written By
Lorenz
More from Lorenz
… Destroy You! My buddy Audionite is back! Back with a big...
Read More