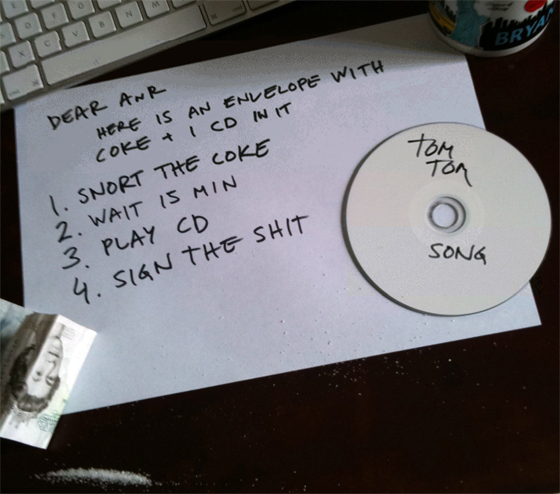 A song about the navi Tom Tom which sounds really crazy but it works! It’s a really cool little EP and all tracks are for free! Let’s talk about the two sorry three guys behind this song.

Loose Cannons:
2010 has seen the Don-Daddas of DJ Duo-dom, Kaiser Saucy & Lord Fader step-up the remixes, already taking Flo-Rida & David Guetta, Brandon Flowers, and Timbaland and Katie Perry to the sweaty dancefloors of the world. Their remix of Lady Gaga and Beyonce’s Telephone hit no.1 on the HypeM Twitter charts and their forthcoming rework of the Rosie Gaines anthem, Closer Than Close has been blowing up all over. Rihanna loved the Cannons’ carnival vibes mix of her track Rude Boy so much, she asked the boys to relick her next single “Rockstar 101” out now on Def Jam. And all this while setting-up their own label and finding time to work on a new studio album and live show!

Peo de Pitte hails from the city of Stockholm. Having relocated to London, Peo has been cooking up a storm with his original production; remix work and his late night, hands-up-heads-down DJ sets. He has been running his own label FlatOut Records, home to his two aliases Peo de Pitte and Haggstrom which has seen support on radio, in press and at the forefront on headline DJ’s sets right around the globe. His hailed remix of “Riverside” by Sidney Samson has so far clocked up over 75,000 downloads!

His trademark combination of big room beats and cutting edge synth’s has resulted in making Peo one of the most exciting new producers to emerge since IKEA. With remixes and releases on labels such as Global Underground, SIMMA, Fingerlickin’, LOT49, U&A and Champion Records. In turn, this lead Peo to be invited to perform exclusive mixes for Annie Nightingale on Radio1 and Loose Cannons on Kiss FM as well as various Internet stations worldwide.

Kissy SellOut is supporting it on Radio1 and the others say:

Tiger Woods “It has nothing to do with my wife. I was listening to this when I turned and hit the tree.”
HotPinkDelorean “When I’m in a set and don’t know where to go, I always use the Tom Tom Song. Sure to help any DJ find his way to smashing the dance!”
Evil Nine “Sounds like it was written in fancy dress which it probably was! Infectious hook and solid drums!”
Goldierocks “A totally rad, ballon esque brain warping, wimpy dose of electro mash up. Yum!”
Lee Mortimer “Oh yes this is rather special ‘Turns’ me on. Geddit?! Hahahahaha”
Lewis Hamilton “This choon makes me do doughnuts”
Homer Simpson “Mmmm donuts…..” 😉

Written By
Lorenz
More from Lorenz
“We are proud to announce that OMGITM and DIRTY DISCO YOUTH have...
Read More