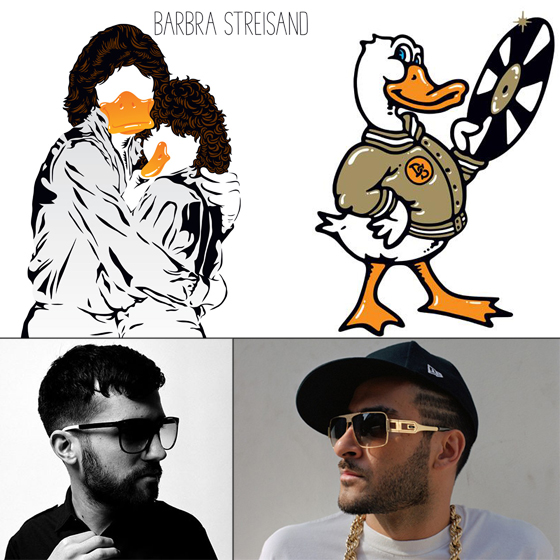 Duck Sauce the fabulous duo formed by A-Trak and Armand van Helden! The main release date is Oct 11th (UK, pre-order here) and 12th (North America). Same for South Africa. Australia is getting early dibs on Sept 24 and Germany gets it a little later, Oct 29. The track is in my head and there is no way to get it out there!

“If 3 million YouTube views of last year’s debut “aNYway” are any indicator, the official release of “Barbra Streisand” will be met with rabid anticipation as fan-recorded bootlegs have fueled blog excitement all summer.

“Barbra Streisand” continues to perfect the Duck Sauce sound, which joyously mashes classic disco house with forward-thinking dancefloor energy and expert production. A-Trak and AVH are bona fide DJ heroes whose team-ups are fueled by anything-goes samples, an almost childlike sense of fun, and 100% NYC attitude. This approach has made Duck Sauce fans-for-life out of partygoers around the globe, and will continue to convert anyone within earshot of “Barbra”‘s instantly addictive, whistling hook.

For the video, director So Me (Justice, Kid Cudi, MGMT) uses the song to soundtrack a hyperactive, ecstatic New York City travelogue. Shot over a week of long nights out with A-Trak and Armand (including live footage from the Fool’s Gold “Day Off” labor day block party), the clip is a pop-art adventure starring commandeered taxis and hotdog stands, sexy strangers, and a who’s-who of famous friends: rappers, producers, indie rockers, graffiti writers and nightlife icons all take turns adding their own special sauce to the song, turning “Barbra Streisand” into one of this year’s must-rewind clips.”