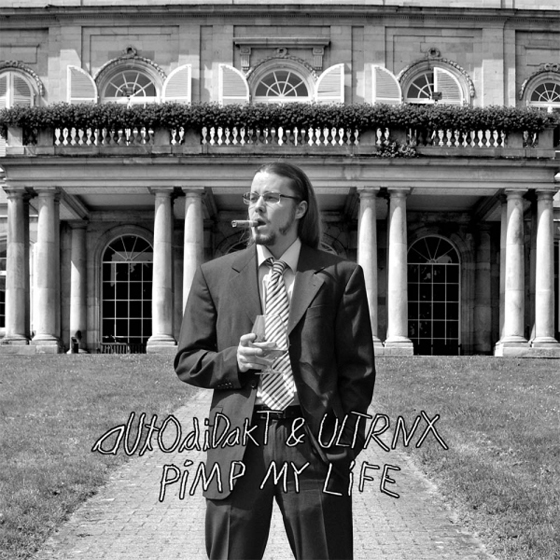 Now here comes the next exclusive preview for Traktor Records! On my last random daily treasuries post you can find the original video of the new release bye aUtOdiDakT & ULTRNX!

Next one already!!! This time no peak-time electro-banger but almost a kind of a Pop-Hit!!! You’ll be surprised… After the ‘Here we go’ EP (featuring Super Super) reached nr. 2 in german club charts and had huge support from all around the globe, aUtOdiDakT wasn’t lazy at all and while rinsing DJ-Mixes on BBC Radio 1, smashing gigs with the likes of the Bloody Beetroots, D.I.M., Zombie Nation, Gtronic, Hostage, Don Rimini, Tom Deluxx and other big cats in Europe or even South Africa, he teamed-up with germanys next big thing in electro ULTRNX (winners of Digitalism remix contest, debut EP ‘The Byterockin’ EP’ out on Audiolith 1.october 2010!) to rework an original track (which started as a joke) off his forthcoming album into 80s drenched Indie-Disco that also introduces aUtOdiDakT as a vocalist! And…somehow it became a HIT!!!

This release is accompanied by a stylistically broad range of remixers, a banging cartoon-video and is set to bring aUtOdiDakT & ULTRNX to the attention of everyone beyond the usual rave-business where both are already well known for their intense productions and furious live-sets in the meantime…
The irony and sweetness of ‘Pimp my life’ works perfect at home, on radio, in the clubs or your local fashion-show and you could also play the neat video (which has a vocal edit without swearing) to your grandma or your little sister…they’ll love it!

On remix duties german Dyebox fresh from their remixes for Zoot Woman or Cicada and their release on french label Boxon Records deliver a huge stomper that takes care of the bangerism this time! Indie-Dance at it’s best with analogue Moog synths and a arrangement perfect for Djs. Everyone who’s into Indie influenced dance acts like Digitalism or Yuksek will love it!!! Watch them blow up next year!!!

British Downbeat legend Jon Kennedy reworks the original track into a deep and jazzy masterpiece that could as well be released on labels like Ninja Tune, Mo Wax or Tru Thoughts. Sheer bliss how he combines rhodes-chords with his trademark breakbeats and a rolling bassline…Old-school, baby!!!

German Stachy aka stacy_g who was part of german Freestyle-legend Fischmob and is now responsible for productions of a lot of german high-profile Techno acts did a Shuffle-Techno version of the original that will turn heads and drop jaws! Definetely a grower on the floor!!!

American Teleffonic did a dark Dub-fueled slow-jam of Pimp my life that reminds me of good old Kruder & Dorfmeister from Vienna…only how they would have sounded if they wouldn’t be just smoking weed, but doing crack and ketamine additionally! Deep, down and dirty!!!!!!

Also you will find two more versions from aUtOdiDakT on the digital release! One is more or less sounding like he would do Pop music alone at home and was the first original version of the track and one is his Italo-Disco approach on it!!!

Big, big early support from more than the usual suspects!!!! You’ll find this in the case of Djs who play totally contrary styles, since there are versions for almost anyone on it!!!

Release-date: 23th september on vinyl and digital
Vinyl distributed by Kickdrum (www.kickdrum.de) & OUR Distribution (www.our-distribution.com)
Digital on all usual platforms!

Written By
Lorenz
More from Lorenz
We still have to wait till the 25th October to get our...
Read More